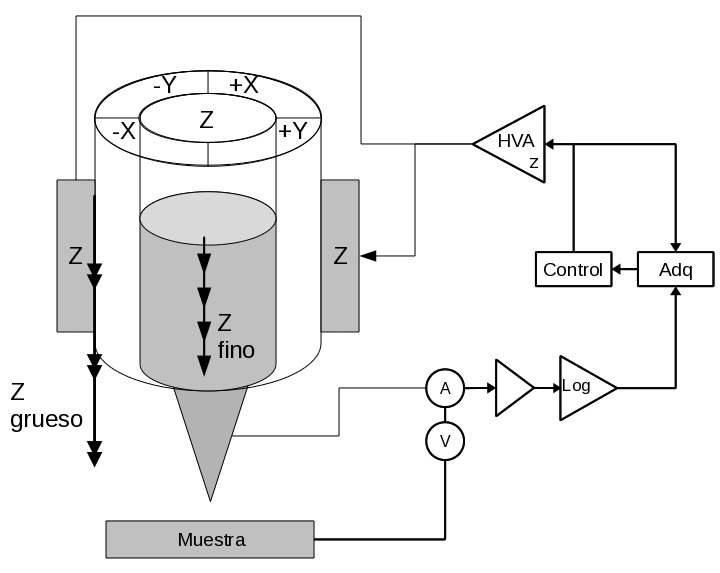 Parameters of a STM

As we want to study condensed matter at low temperatures, we need a system compatible with such experiments, at low vacyum, temperatures close to 0 K, high magnetic fields, and capable of establish a tunnel current between a sample and a scanner, with atomic resolution.

To move the scanner in the sub-nanometer scale, we use a piezoelectric crystal. This crystals can convert electrical energy directly to mechanical energy. Piezoelectric effect is related to electric fields. Piezo actuators do not produce magnetic fields nor are they affected by them. They're especially well suited for applications where magnetic fields cannot be tolerated. Also, the inverse piezoelectric effect continues to operate even at temperatures close to 0 kelvin. 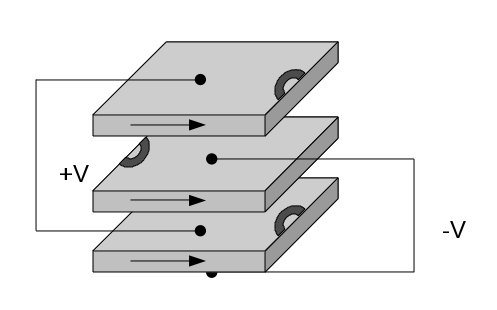 When exposed to an electric potential, piezoelectric materials change shape. This they named the “inverse piezo effect”.

To a first approximation, a piezo actuator is a spring-and-mass system.

Travel ranges of Piezo Actuators are typically between a few tens and a few hundreds of μm (linear actuators).

Piezoceramics are not subject to the “stick slip” effect and therefore offer theoretically unlimited resolution. In practice, the resolution actually attainable is limited by electronic and mechanical factors.

The direction of polarization (axis 3) is established during the poling process by a strong electrical field applied between two electrodes. For linear actuator (translator) applications, the piezo properties along the poling axis are the most important (largest deflection). Piezoelectric materials are characterized by several coefficients. The most important for us is the strain coefficient dij. Is the the strain developed [m/m] per unit of electric field strength applied [V/m]. 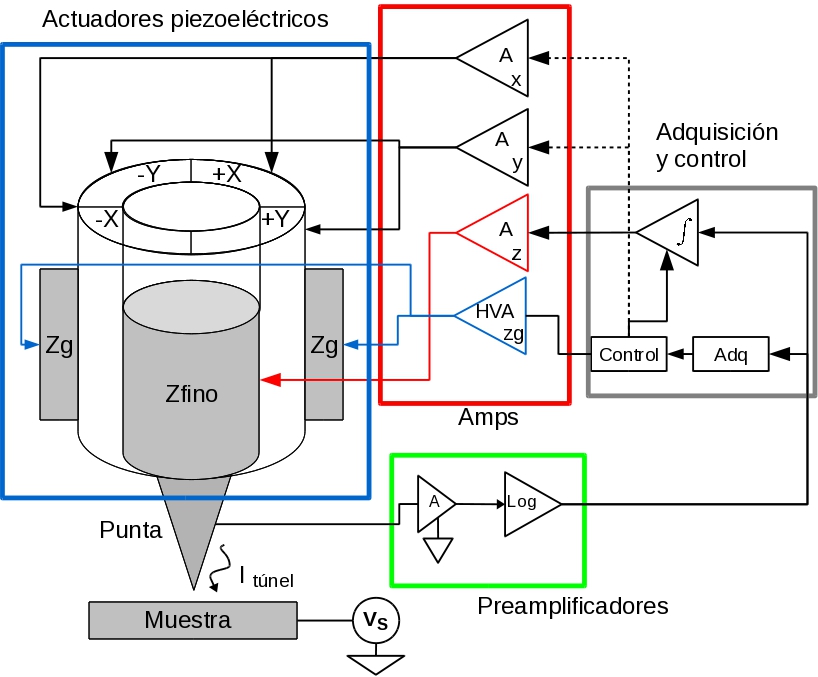 Impedance with mechanical coupling and no compensation network

Electrically, the crystals can be fairly modeled as a capacitor. Without a external compensation network, the crystals impedance can be seen on the next figures. A tipycal driver has a capacitance of 1-10 nF. At the frequencies of interest, there are no resonance, and the difference  between a mechanically loaded or unloaded driver, is negligible. With these conditions, the driver consumes less than 20 mA. 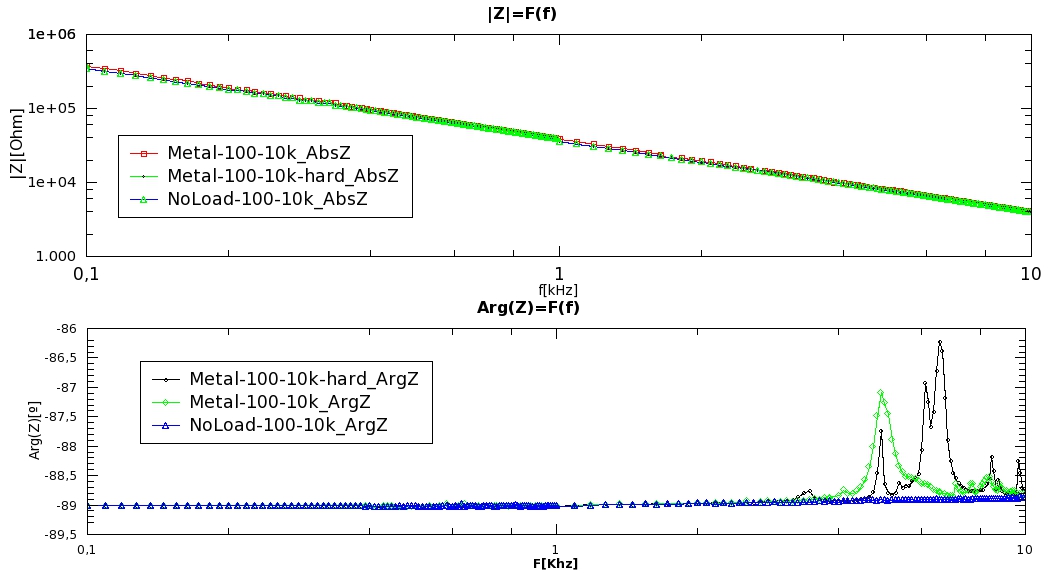 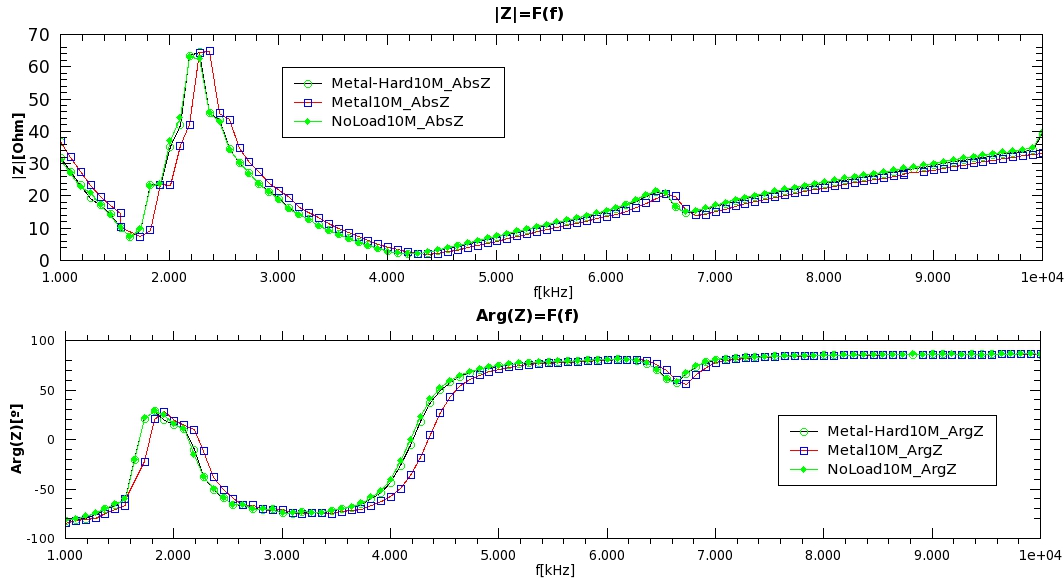 Measure of the piezoelectric constant D13 with the discrete amplifier 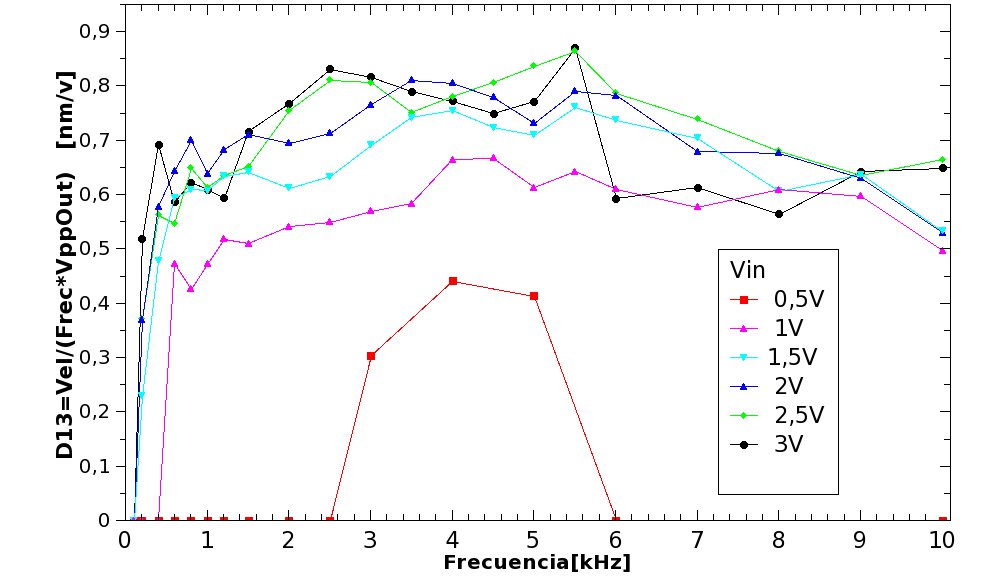 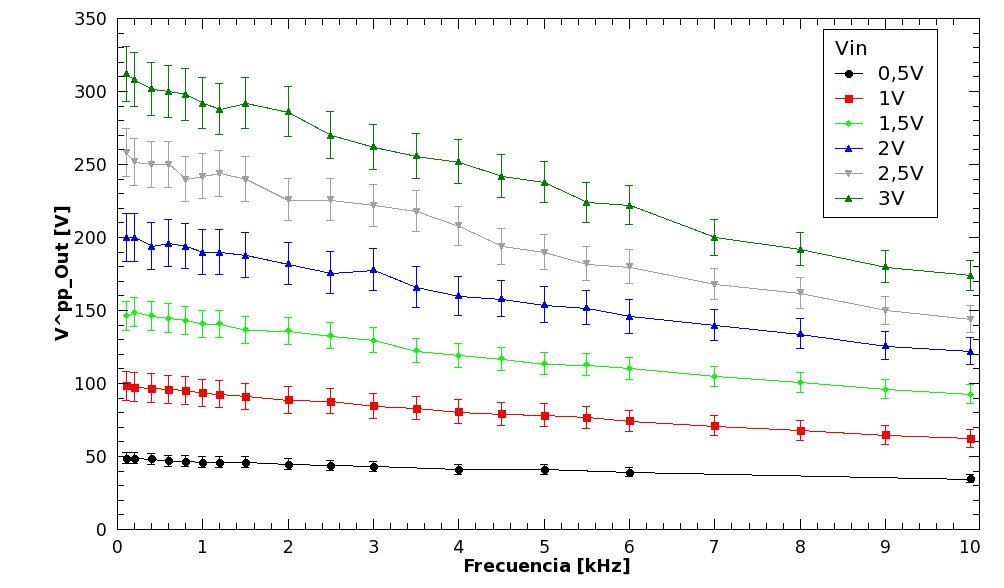 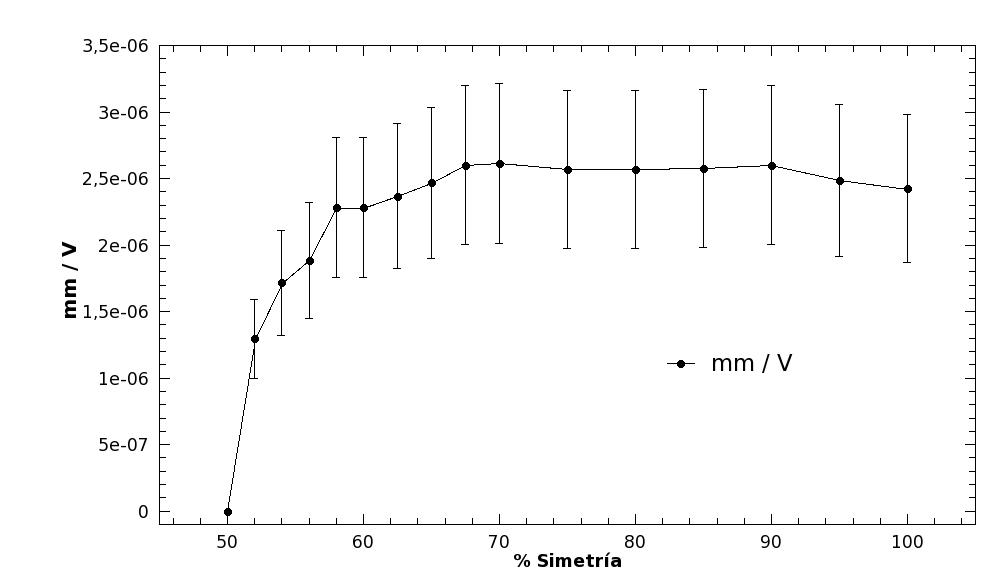 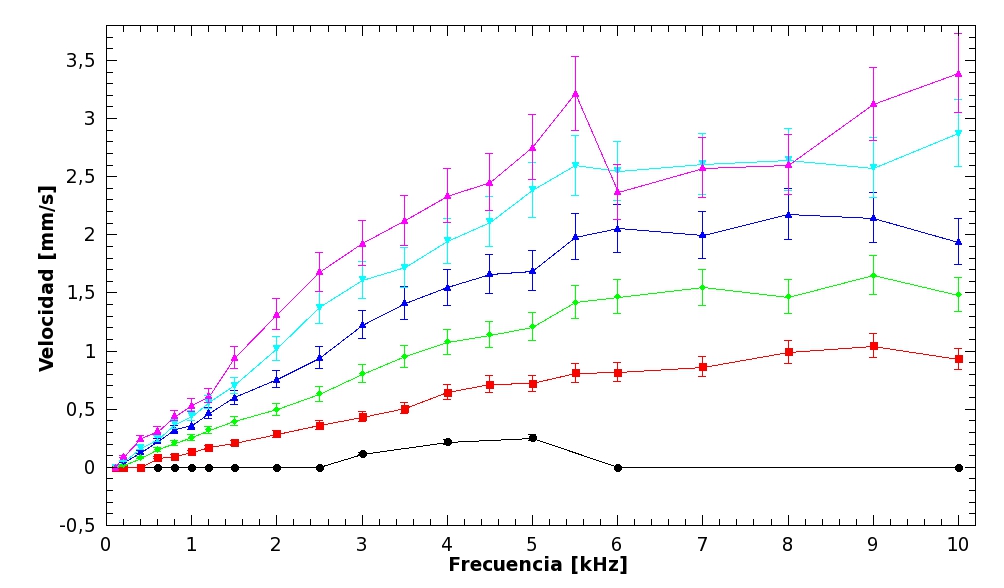 A draw of the experiment. Up and down are actually voltage ramps to move the load to the left and the right.

The piezo-electric drivers are voltage amplifiers with the following characteristics:

The power source provides a symetric DC voltage of 150V. It's a lineal source, with a three winding transformer, of relation 2:1, and the bridge diodes. One bridge rectifies to +155V DC and the other to -155V DC.

The amplification is done by two operational amplifiers. They're on a classic inverting and non inverting configuration, drived by the same input signal. This input may be any voltage signal limited to +- 10V peak, otherwise the output will saturate. The guaranteed peak output voltage is 150V and -150V.

Analyzing the circuit, it shows that the closed loop gain is set to aproxymately 15 on each operational amplifier(R2,R3,R4,R5 for the non inverting amp ; R9,R10,R14,R15 for the inverting amp). From measures on the amplifier, it was determined that the small signal and closed loop bandwidth is 200kHz. For large signals the amplifier is limited by the slew-rate to a bandwodth of 30 kHz.

The amplifiers are no frequency compensated, because the closed loop gain is set to 15, and as it's a high value, no compensation is needed in this case, accordign to manufacturer recomendations and stability analisys.

As safety measures, the peak output current is set by R7 and R16 to be 20mA, several clamp diodes are used to prevent over voltage on inputs due to ESD or other reasons.

All the capacitors are used as filters for 50 Hz and high frequencies, or as charge sources. 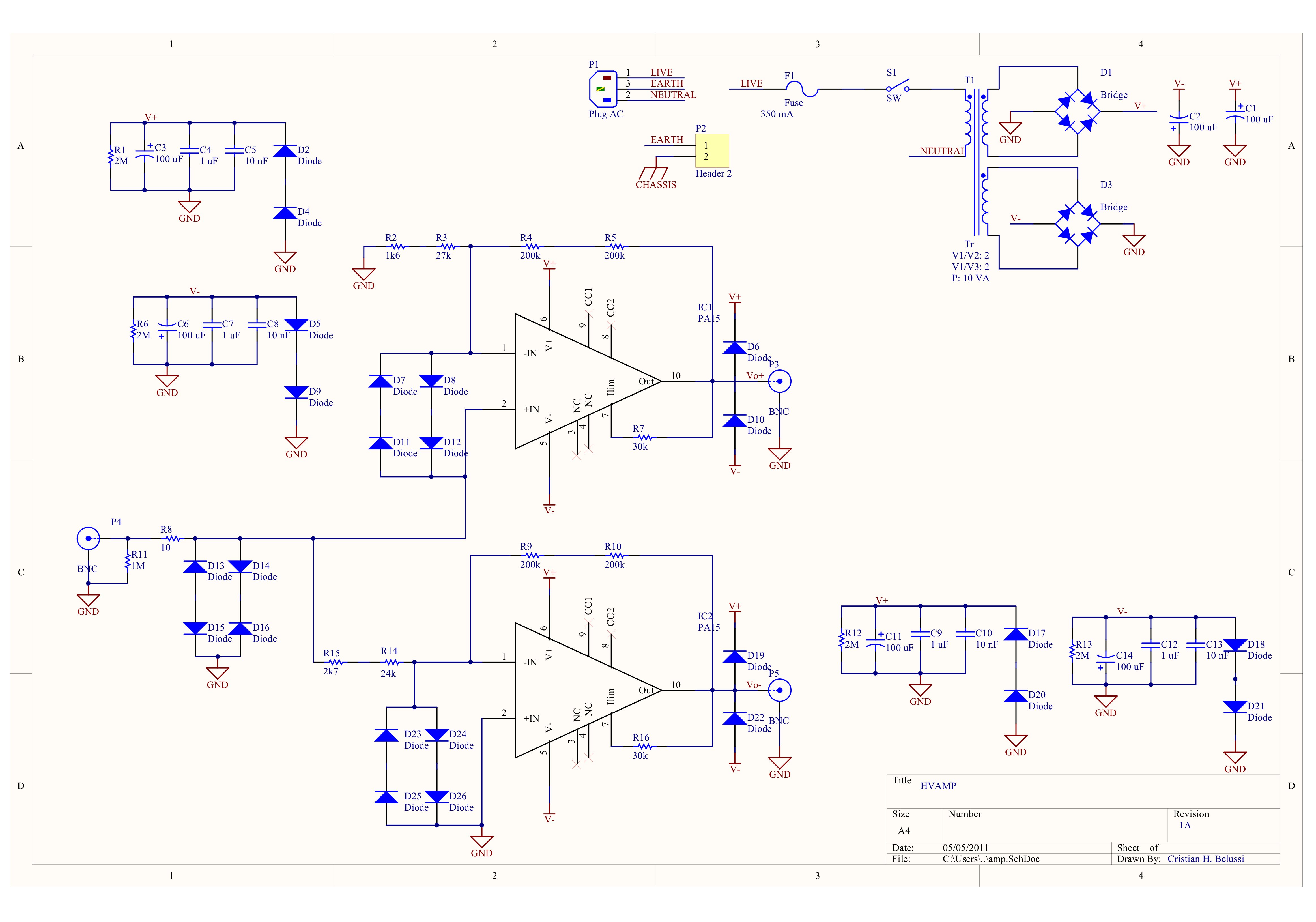 The next plot shows the measured BW of the amp. This correspond to small signal for a pure resistive load. Horizontal axis is the frequency and vertical axis the gain of the system. The -3dB bandwith is approximately 150 kHz. 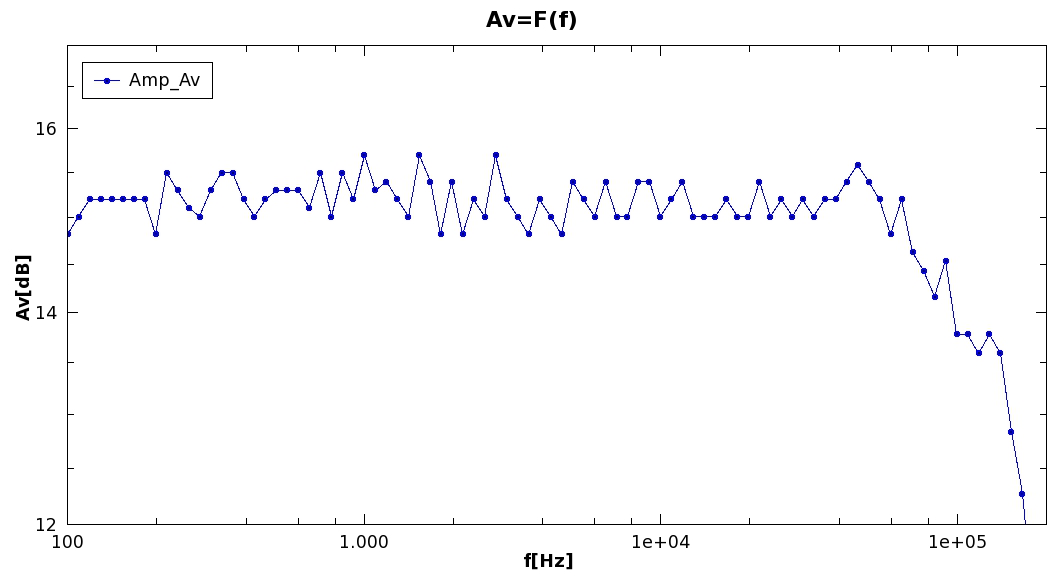 Amplifier based on IGBT transistors

This circuit can deliver voltage outputs high as 1kV thanks to the IGBT transistors. Basically, this transistors brings the best from the BJT and MOSFET technologies: no input current on the gate, only electric field; and at the output, low drop voltage, so less joule losses. Also this kind of transistors can easily withstand high voltages, and high currents in other cases. This amplifier is very interesting because integrates the high tension driver and ramp oscillator. To create an alternating signal, this circuit works like an 'analog' H-bridge inverter. The input is 1kV DC. Each branch can be activated through a signal on the gate of the transistors. When one branch of the circuit is on, the other must be off, otherwise there will be a short circuit! In series with the 1kV power supply (not in the schematic) there is a resistance enough to make an RC signal output. So, when the transistors are properly activated, at the output there will be an alternating RC exponential wave signal, at the frequency wich the transistors are switched on and off. 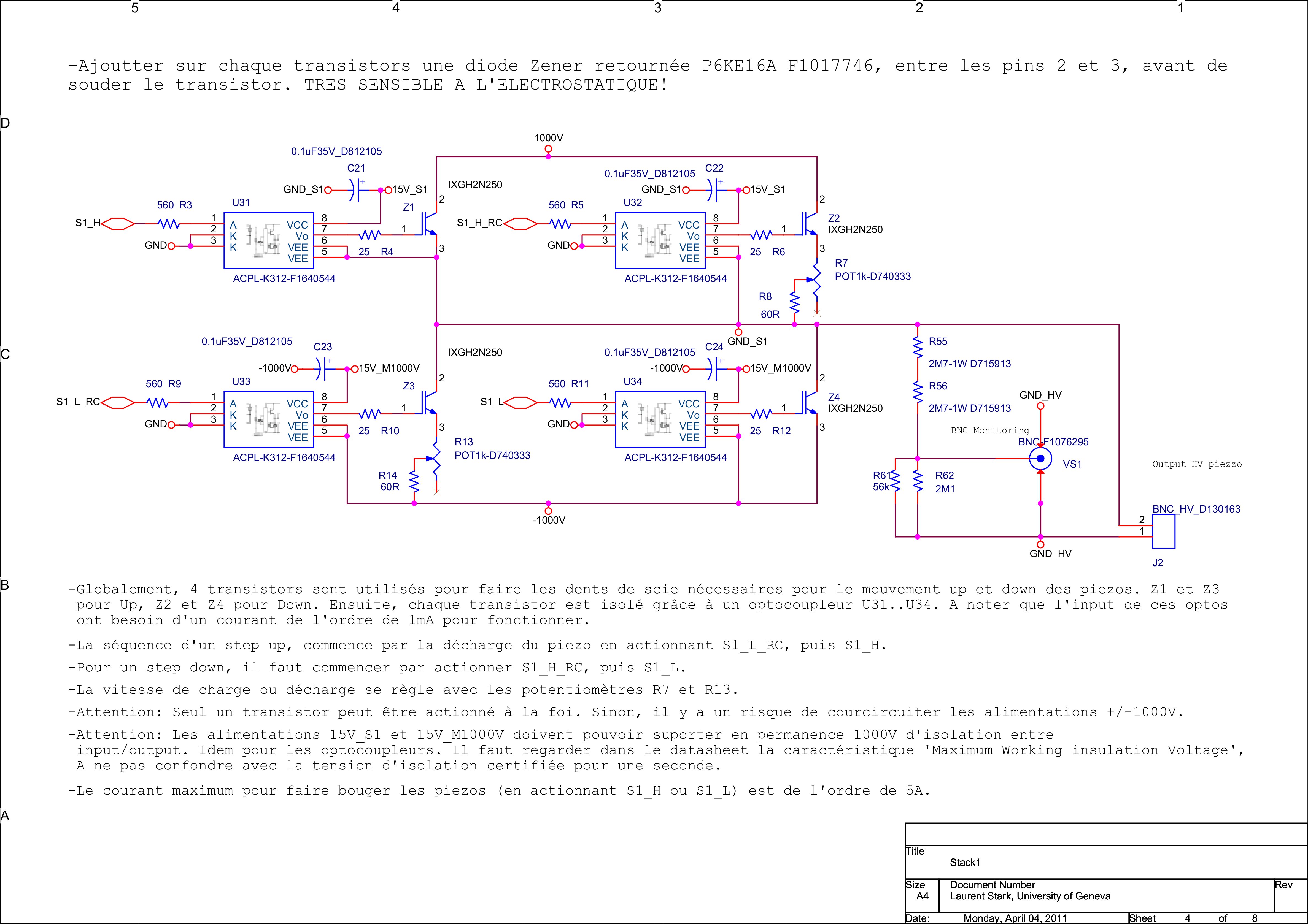 Amplifier based on discrete design

The DC power comes from a switching power supply. A half bridge topology creates 800V DC and up to 100mA of current. 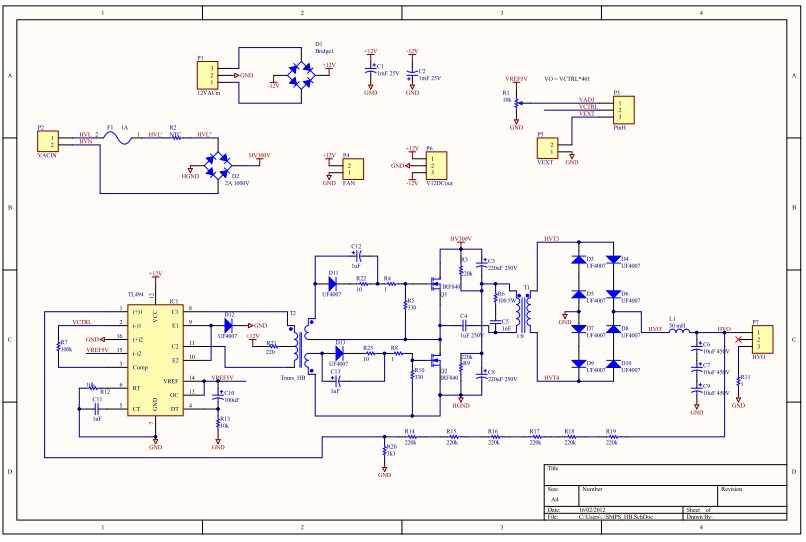 The power amplifier is a discrete design with two stages, and one op-amp closing a feedback loop and linearizing the system. Each stage uses a power transistor, the BUZ80A, but can be replaced with N MOSFET transistors with the same parameters. The first stage works as a common source amplifier, providing much voltage amplification, and drives the second stage. The second stage works as a common drain, providing high current and low impedance at the output. For safety, before the output is a basic but effective current limiter, to avoid short circuits and system failure on the output. 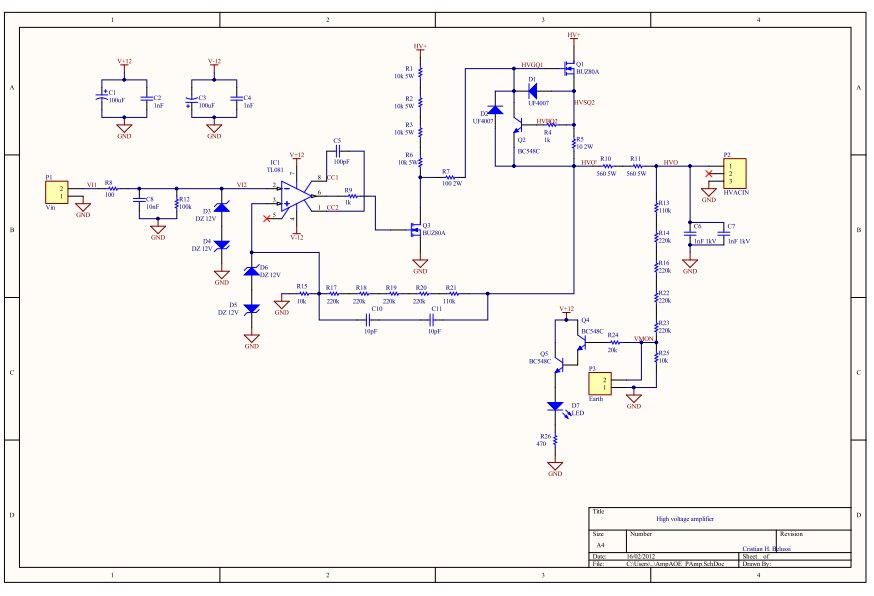 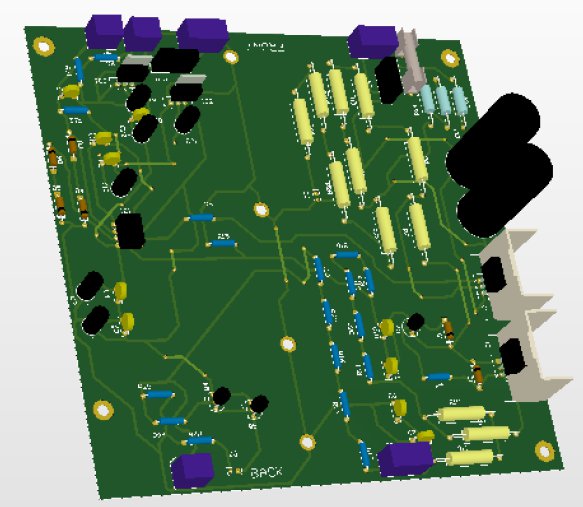